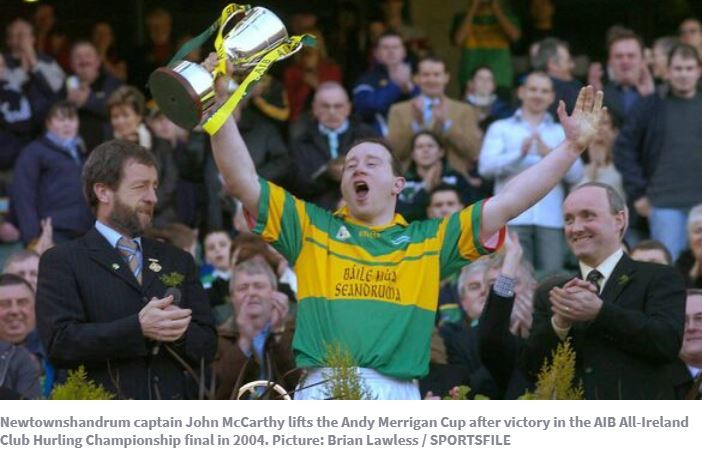 Published: about 1 year ago

The lack of GAA as a social outlet has been “exceptionally tough for the older farmer”, says 2004 All-Ireland SHC club winning Newtownshandrum captain and farmer John McCarthy.

With clubs closed five months, McCarthy has noticed how the inability to engage and interact has had a major negative impact.

“The average age of the farmer in Ireland is somewhere in the late 50s. A lot of them don’t know how to Zoom. The pub and the GAA would be the outlets and they’re closed. They would go to the agricultural store the odd time as well and even then you’re limited to four people at a time.

“It has had a major impact on elderly farmers who aren’t able to interact digitally and what have you. The GAA has been a massive loss to them. Before Covid, the farming season would happen around championship time, they would complement each other and that now has been robbed off them.

“Compared to other demographics, farmers haven’t suffered as much financially — the likes of pubs and restaurants have been hit catastrophically — but socially it has been exceptionally tough for the older farmer.”

No matches and not being able to attend funerals have added to the sense of loneliness in rural Ireland.

“You might meet one or two people or talk on the phone but you’re not having 100 or 150 people standing outside afterwards and talking and giving out about this and that. It’ll only be next year that crowds come back properly when you can try and rekindle that community spirit.

It’s the same for rugby and soccer, but for rural GAA, when you take the match out of it, there is no centrepiece. You really only meet up for matches and funerals — they’re the landmarks in the year — and you can’t do either.”

The rural pub had been on a precipice pre-Covid but the pandemic will finish many, McCarthy fears. Newtownshandrum no longer has one while other villages in north Cork, like Dromina and Freemount, are down to one.

“In the 1990s, Charleville had something like 26. They are now about six. It’s a dying industry and a new culture of drinking at home has been established because of Covid, I think,” he says.

“Pub culture is only going one way, especially in rural Ireland, and the lack of communal places is worrying. We have the community hall in Newtown but you now have no central meeting point to gather after a match now that the pub is gone. It’s a really sad thing and a real shock to the system for people, especially older ones.

“Young people will continue to meet up whether it’s at cafes or outside shops, but for the older generation it’ll be going back to visiting houses. In four or five years time, we might be looking back at country pubs and the vibrancy of them 20, 30 years ago and it will be alien to us.”

Well done to Tim and Lauren from the Juvenile Club.

The Juvenile club would like to congratulate Lauren McAul...